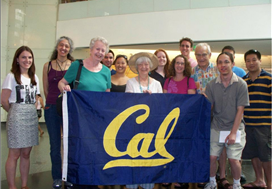 A mirror image of our illustrious alma mater, the club is comprised of alumni of all backgrounds and walks of life, and is as diverse as the world itself.

From Capitol Hill to Federal Triangle, and the National Institutes of Health in Maryland to the Smithsonian on the National Mall, our club is proud to represent alumni of all backgrounds and ages and several hundred prominent alumni who are well-accomplished in the D.C. world of politics and beyond.

As one of the oldest chapters within the greater California Alumni Association, our club is also among the largest outside of California. It is estimated that over 10,000 alumni reside in the Washington, D.C. metropolitan area, thanks in large part to the university's historic ties to the nation's capital, including Cal in the Capital (CITC) and the Manhattan Project. Our primary missions include funding our Leadership Scholarship housed at CAA and the CITC Endowment annually, gathering our local alumni annually for our picnic/welcome party for new students, getting together with Stanford annually for the Big Game viewing and since 2010 honoring a local alum who has distinguished themselves within their profession. The Annual Reception is our premier annual event. This important event helps raise much-needed funding to support our expansive club operations and to support student scholarships at UC Berkeley.

1930s – The club begins and starts establishing itself as one of the oldest and most influential chapters across the country.

1960s – One of the earliest iterations of the Annual Reception takes place at the Capital Hilton with Earl Warren, Dean Rusk, and Robert McNamara among attendees.

1983 – The club honors Norman Minetta for his work in supporting its efforts.

2014 – After one of the most active years in club history with 105+ events, the club relaunches its modernized website and co-hosts U.C. President Janet Napolitano. The club simultaneously wins the prestigious $2,000 scholarship award from the Capital Alumni Network (CAN) for its work across all areas, including community service and alumni dev't.