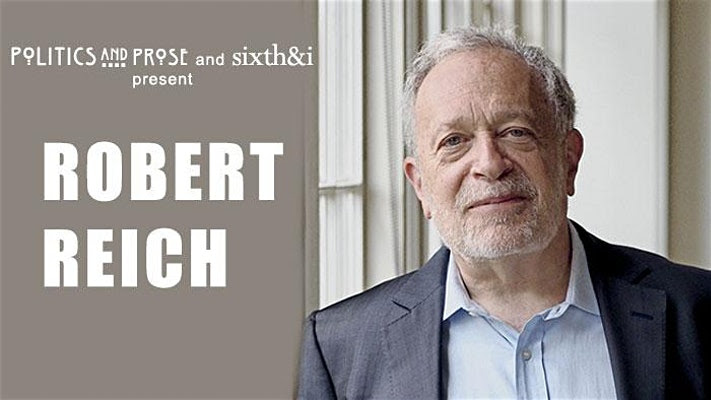 Robert Reich discusses his new book, THE SYSTEM: WHO RIGGED IT, HOW WE FIX IT.


Robert B. Reich is Chancellor's Professor of Public Policy at the University of California at Berkeley and Senior Fellow at the Blum Center for Developing Economies. He served as Secretary of Labor in the Clinton administration, for which Time Magazine named him one of the ten most effective cabinet secretaries of the twentieth century. He is also a founding editor of the American Prospect magazine, chairman of Common Cause, a member of the American Academy of Arts and Sciences, and co-creator of the award-winning documentary, "Inequality For All." He's co-creator of the Netflix original documentary "Saving Capitalism," which is streaming now.

From best-selling author Robert Reich comes The System, an urgent analysis of how the "rigged" systems of American politics and power operate, how this status quo came to be, and how average citizens can enact change.

Millions of Americans have lost confidence in our political and economic system. After years of stagnant wages, volatile job markets, and an unwillingness by those in power to deal with profound threats such as climate change, there is a mounting sense that the system is fixed, serving only those select few with enough money to secure a controlling stake. With the characteristic clarity and passion that has made him a central civil voice, Robert B. Reich shows how wealth and power have interacted to install an elite oligarchy, eviscerate the middle class, and undermine democracy.

Using Jamie Dimon, the chairman and CEO of JPMorgan Chase as an example, Reich exposes how those at the top propagate myths about meritocracy, national competitiveness, corporate social responsibility, and the "free market" to distract most Americans from their accumulation of extraordinary wealth, and power over the system. Instead of answering the call to civic duty, they have chosen to uphold self-serving policies that line their own pockets and benefit their bottom line. Reich's objective is not to foster cynicism, but rather to demystify the system so that we might instill fundamental change and demand that democracy works for the majority once again.

NOTES: Doors will open at 6pm. The event includes Q&A and should last 60-75 minutes. A book signing will follow the event. Note that the ticket price does not include the book, but books will be for sale at the event.

See who else is RSVPing:

Sorry, this event is sold out.
book club Robert Reich